Okay, so technically this is the third week, but last week I took off since it was the 4th of July. Therefore, I am calling this week two.

This week’s item: an edible weed known as purslane.

You are probably thinking that I’m nuts trying to tell you to eat weeds. Just hear me out, though. I promise I’m not [really] some crazy hippie dietitian.

It’s pretty, right? I am tempted to put some sprigs in vases around my apartment.

Also, a little background on purslane: a “weed,” it grows very easily and its seeds are quite resilient. So it is pretty much inevitable that it will find its way into a garden. And if it’s going to grow anyway, you might as well eat it.

Purslane is popular in certain Indian states and Latin American countries. It is even used by the French as a salad green, and is occasionally referred to as “Mexican parsley.” The entire plant – leaves and stems – are edible.

Purslane has a mild taste, similar to spinach or watercress with just a hint of tang and bitterness (not nearly as bitter as kale, Swiss chard or many other greens).

As far as nutrition goes, 1.5 cups of fresh purslane (you would use at least that much in a salad) contain:

Though purslane can be cooked, I chose to eat it raw as the base of my salad. I had some canned crab meat from Trader Joe’s (real crab for a great price!) and decided to make some crab cakes to put on top of the salad. I figured that purslane’s fresh, crisp flavor would go well with a savory & rich (rich tasting, not rich in calories) crab cake. In about 20 minutes, my crab cakes were mixed, pan-fried and served as a delicious topper for the purslane! 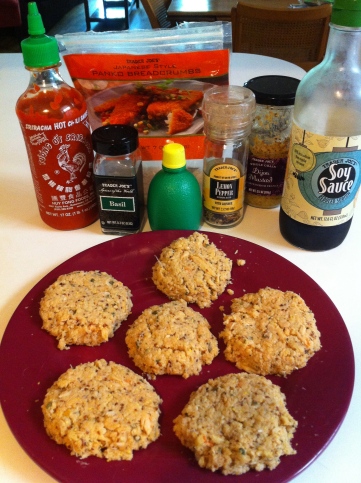 Crab cake ingredients. And yes, I used the store-bought lime juice. Sometimes you just have to improvise…

Mix 1 tsp grainy mustard with 1 Tbsp olive oil in small bowl. Place about 2 cups purslane and 1 cup spinach on a plate and drizzle with mustard/oil mixture.